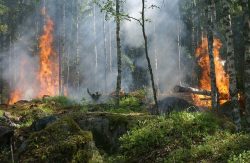 After a long season of bushfires in Australia, many of which are still burning, it is important to look forward to recovery and regeneration. There is much to do, measure and assess. Among these is the risk of soil erosion particularly where heavy rainfall, or high winds, impact bare ground.

This article was first published on the Environmental Biophysics website in 2015 where the risk of erosion was assessed in relation to wildfires in North America. Although the context is a world away, the concepts and ideas are highly relevant to our experience here in Australia…..

Flagstaff, Arizona is typically a dry place. But in August 2010, churning rivers flowed down roadways and around—and through—homes in the Flagstaff area. The floods were caused by a fire—the 15,000 acre Shultz fire that raged around Flagstaff from April to July, 2010.

One might not ordinarily think of a fire causing a flood, but to Forest Service research engineer Dr. Peter Robichaud, the setup is classic. “After a fire, you’ve changed the hydrology of the hillside,” he says. “Normally in an unburned area, rain gets soaked up by forest floor material on the ground and then it soaks into the soil. After a fire goes through, there’s no forest floor material to soak up the water and the soil may become water repellent due to heat from the fire.”

Reduced infiltration means increased runoff and erosion. As Robichaud explains, “If you have a steep slope and high velocities, along with very erodible soil, things converge rather quickly and you can generate debris flows and mudslides.  It’s not just a 100% increase. It’s orders of magnitude increase.”

After a fire, soil commonly becomes hydrophobic, just one factor in increased runoff.

One of Robichaud’s research interests is in designing a model for post-fire erosion. The model helps land managers and assessment teams in the field to evaluate the risks such erosion might pose. “It lets them see what might be affected if they have an erosion event,” he says.

“Is it going to affect the municipal water supply, affect a road crossing, an interstate highway, a school that happens to be at the mouth of a canyon? Once they can estimate the amount of erosion that might occur, they can use the model to help pick treatments to reduce the risk.”

Often practitioners will use the model to establish an early warning system to areas that will be affected.

Along with developing the model, Robichaud has also looked for ways to help postfire assessment teams gauge the water repellency of the soil after a fire. Historically, soil in a burned area was evaluated using the water drop penetration time test, or WDPT. Team members would place a drop of water on the surface of the soil and time how long it took to be absorbed. This seventies-era test was easy to do in the field, but Robichaud wanted something more representative.

One of Robichaud’s research interests is in designing a model for post-fire erosion to help land managers and assessment teams in the field evaluate the risks such erosion might pose.

“I’ve always felt we could do a better job of characterizing the changes in soil condition,” he says. “[The WDPT] doesn’t really represent the physical process of the water infiltrating, because you put a single drop of water on the surface… The ideal method is a rainfall simulator, but it’s not practical in the field. [You] can’t expect every assessment team after a fire to set up a rainfall simulator for a couple of weeks.”

As he looked for alternatives, Robichaud started using a Mini Disk Infiltrometer. Practitioners all over the world use infiltration measurements along with Robichaud’s model of post-fire erosion to assess the impacts of a fire, predict erosion, and make plans to manage and reduce the associated risks. Robichaud’s online Erosion Risk Management Tool allows researchers and assessment teams alike to use scientifically solid analysis. He’s currently involved in refining and validating the model, improving assessment techniques, using remote sensing technology to perform assessments, and looking at alternative post-fire treatment options to reduce erosion risk, among other things.