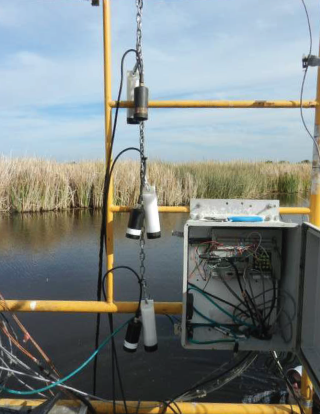 This case study was originally published on the Eosense website.

Researchers at the University of California, Berkeley, have recently adopted the eosGP-001 CO2 Sensor to quantify carbon in water and soils.

The project is taking place in the Sacramento-San Joaquin Delta (SSJD) where former agricultural land is being restored into an original wetland state. As part of the restoration process, it is believed there will be an increase in carbon (CO2) sequestration which will offset greenhouse gas (GHG) emissions. However, it is also expected that methane (CH4) emissions will also increase from the restored wetland which may negate any positive effects on GHG from carbon sequestration.

CO2 and CH4 fluxes are currently measured via an Eddy flux system. However, greater spatial and temporal data is required to explain variable patterns in CO2 fluxes. Therefore, the researchers deployed eosGP-001 CO2 Sensors for continuous measures of CO2 concentration in soil and water.

The research group decided to deploy the eosGP-001 CO2 Sensor because:

So far the study has shown that the oldest of the restored wetland sites appears to be sequestering less carbon than it did in when it was newly restored. One possible explanation for this is that the detrital layers have become thick enough that new growth is taking longer to get through. Since new growth typically stores more carbon, the attenuated growth may explain the unexpected decrease in sequestration observed.

The next revelation was the sharp decrease in soil CO2 levels in the alfalfa fields after mowing took place (Figure 1). This is likely due to the removal of the photosynthetic surface of the plants resulting in a decrease in photosynthesis, and consequently a decrease in root exudates. These exudates are metabolized by bacterial communities in the soil, which in turn respire it as CO2. 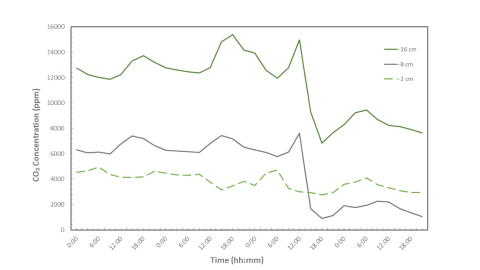