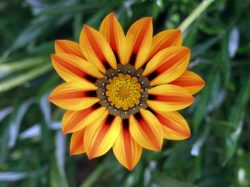 Flowers have been largely neglected probably due to the difficulty of accurately measuring transpiration rates with a non-destructive, or non-intrusive, technique. However, mini-sensor technology allows researchers and growers to accurately measure flower water use. Not only will these sensors improve our scientific understanding of reproductive fitness and success, but they can assist growers to improve yield or, with the cut-flower industry, the longevity of products.

The mini-sensor technology includes the SF-4 Sap Flow Sensor and the FI-XSM Extra Small Dendrometer. These sensors can be installed in stem diameters as small as 1 mm and are sensitive to the smallest changes in transpiration and stem diameter variations. Therefore, the sensors are highly suitable for a large range of flowers and, in particular, commercially important crops such as roses.

Scientists at Edaphic Scientific trialled the SF-4 Sap Flow Sensor on two varieties of Gazanias. Over the first two days, the flowers were monitored outside under natural sunlight. Over days three and four, due to rainy weather, the flowers were moved indoors under artificial grow lights. Like whole-plant transpiration or sap flow, flower transpiration exhibited a diel, bell-shaped curve with maximum flow rates during the middle of the day and zero flow rates during the night. Flow was significantly higher under natural sunlight versus artificial light. 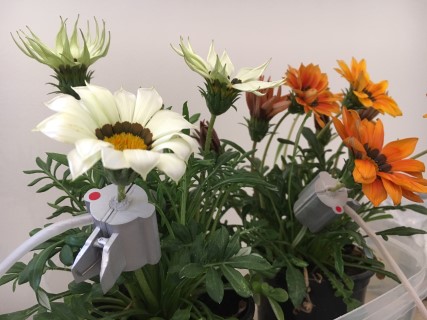 The SF-4 Sap Flow Sensors installed on the peduncle of Gazania flowers. 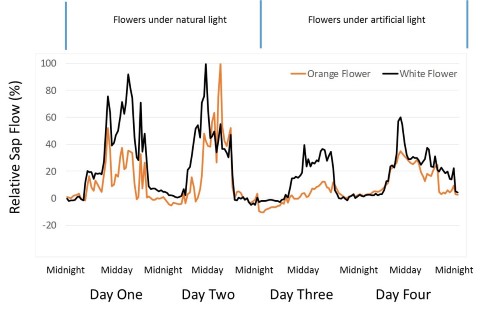 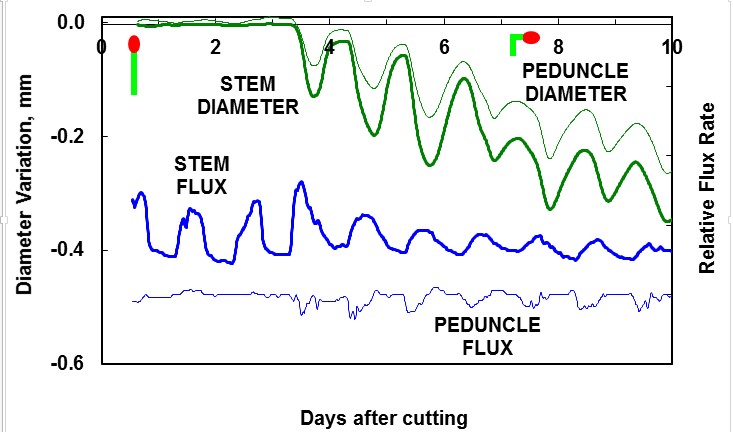 A summary of sap flow and dendrometer data on three varieties of rose with sensors installed on the stem and peduncle.

The stem and the peduncle were stable during first 3.5 days while the stem flux rate demonstrated typical diel behaviour: low (about zero) at night and relatively high at midday. The peduncle flux was also stable. The stable stem diameter at changing flux rate may be explained by very low hydraulic resistance of stem xylem without roots at the bottom of the stem.

It is interesting to note the negative sap flow in the peduncle. Most likely, the diurnal transpiration of leaves reduced water pressure (potential) in xylem so that the water moved down from the flower. The wilting was observed on 7th day after cutting. 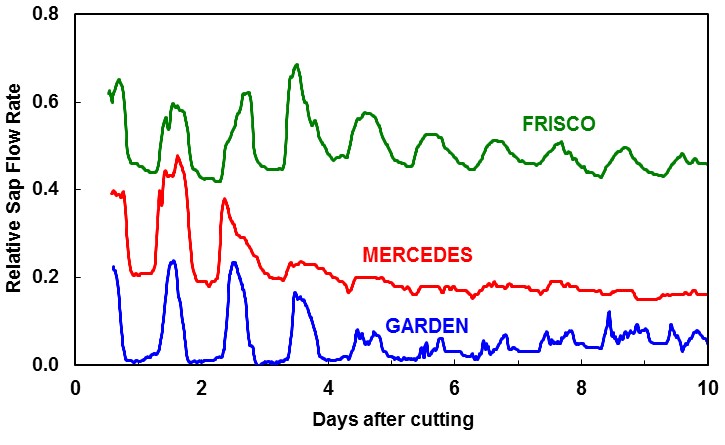 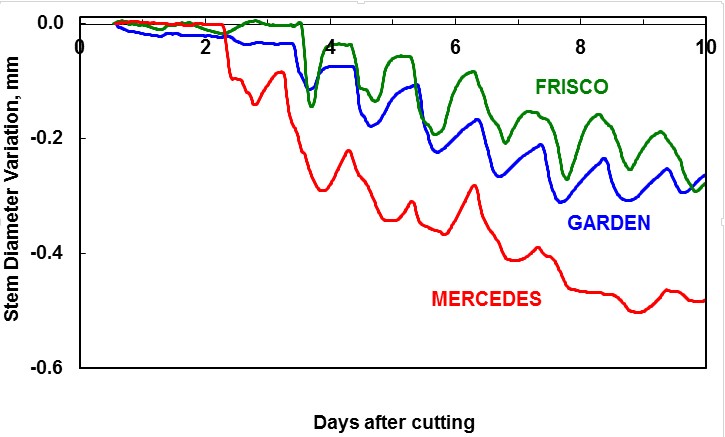 Stem diameter variation, as measured with a dendrometer, of three varieties of rose over successive days following cutting.

These data demonstrate that the SF-4 and FI-XSM can successfully be deployed on flower stems. The data is useful for plant physiologists interested in flower physiology and reproduction success. Horticulturalists can also use these data to better understand the vitality and health of their crops, particularly in the cut-flower industry.