how tides influence the biogeochemistry of coastal zones 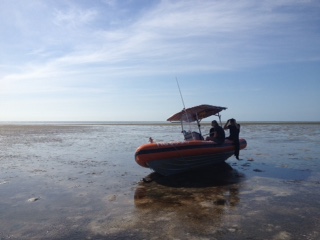 Scientists can be stranded by the tides, and tides can also alter the biogeochemistry of coastal zones.

Tidal movement of water along the coast zone and estuaries has significant effects on the ecology and biogeochemistry of these ecosystems. Ebb tides (outgoing tides) can wash away sediments and microbial by-products such as hydrogen sulfide. Incoming tides can introduce renewed water into these systems. In recent years, scientists have been gaining an increasing understanding on just how tides can influence the biogeochemistry of coastal zones. In particular, recent studies have shown how tides, particularly different types of tides, can alter the concentration of potentially toxic chemicals such as dissolved hydrogen sulfide (H2S) and dissolved methane (CH4).

The water regime and hydrology of coastal zones and estuaries will most likely be different during these different tidal periods. During a neap tide there is less water movement so there is less flushing of sediments, nutrients and other materials when compared with a spring tide. However, there has been little direct scientific measurements of this change in biogeochemistry as caused by the tides.

Studies on methane (CH4) have also found that tides can influence CH4 concentration. A study in Germany and another study in New Zealand have both discovered that at low tide there is a distinct increase in CH4 in the ocean (Grunwald et al 2009; Krabbenhoeft et al 2009).

Figure 5a from the Grunwald et al. shows results from a study which was conducted in the German Bight near various tidal flats. The data were measured with a METS Dissolved Methane and Temperature Sensor that was attached to a monitoring system on a mooring.

The exact causes of this pattern are unknown and probably differ depending on the site. The authors of the German study suggest it could be caused by a dilution effect with freshwater, low in CH4 concentration, diluting CH4 at high tides. In the New Zealand study, which was conducted offshore and in the deep ocean, the authors hypothesised that at low tides there was reduced hydrostatic pressure on the seabed that led to higher rates of CH4 seepage into the ocean.

It is clear that tides can have a significant influence on the biogeochemistry of estuaries and coastal zones. The accurate measurement of biogeochemical patterns and processes is necessary to better understand how these may influence ecosystem health and functioning.