what is absorbance spectroscopy?

Light is directed at an object, passes through, and is detected on the other side. Some of the light is absorbed, reflected and transmitted. The detector, on the other side of the object, measures how much of that light is absorbed. The detector can also measure which electromagnetic wavebands have been absorbed and which have been transmitted. This, in its most simple sense, is absorbance spectroscopy, also known as absorption spectroscopy.

Why is absorbance spectroscopy useful?

An example of a spectral signature is given below. Certain absorption peaks along the electromagnetic spectrum are present for different elements. These absorption peaks are unique to that particular element. For example, the element hydrogen, in visible light, has absorption peaks at 410nm, 434nm, 486nm and 656nm. By comparing measurements against a database of known spectral signatures, a scientist can quickly determine which compounds and elements are present in their sample. Here is an example database that was consulted for the element hydrogen:

Below are outlined a few example applications where absorption spectroscopy is used. This list is not exhaustive, and the technique is used across many additional fields of science. 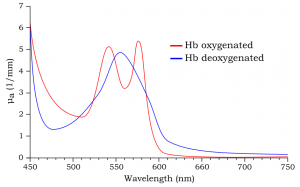 Absorbance spectroscopy is commonly used to analyse liquid water samples for environmental assessment and management. For example, a sample is taken from groundwater, a river, ocean, or some other water body. The sample is then placed in a cuvette and this cuvette is placed in the VLS-1000 Spectral Analysis System. A halogen lamp light source passes a uniform spectrum of electromagnetic light through the cuvette sample and the VLS-1000 Spectrometer detects wavebands between 300 and 1100nm. Chemical toxins with unique spectral signatures can then be determined.

As with the example given above in this article on our sun’s light passing through a leaf and being measured by a spectrometer, celestial bodies and other suns, emitting light, pass through various astronomical objects and can be measured with spectrometers on Earth or above Earth’s atmosphere. The measurements can then be used to derive information about the chemical composition of exoplanets, as well as temperature, density, mass, distance, luminosity, and relative motion using Doppler shift measurements.