resolving the mystery of deep roots 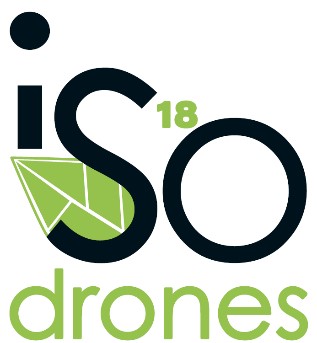 Since the presentation of the heavily debated ‘two water worlds hypothesis’ (McDonnell, 2014), the attention of many ecohydrologists – especially those working with water isotopes – has been focusing on  what was termed as ‘ecohydrological separation’.

In the original hypothesis, the author claims that based on the studies of Brooks et al. (2010) and Goldsmith et al. (2012) plants in some watersheds prefer water which is ‘more difficult’ for them to access (i.e. soil water with relatively higher matric potential) over ‘easier’ accessible water resources (i.e. stream water).

The hypothesis is currently heavily debated (Bowling et al., 2017; Dubbert et al., 2019; Sprenger et al., 2016) , but whether or not one agrees, it has defined the research agenda over the last years. 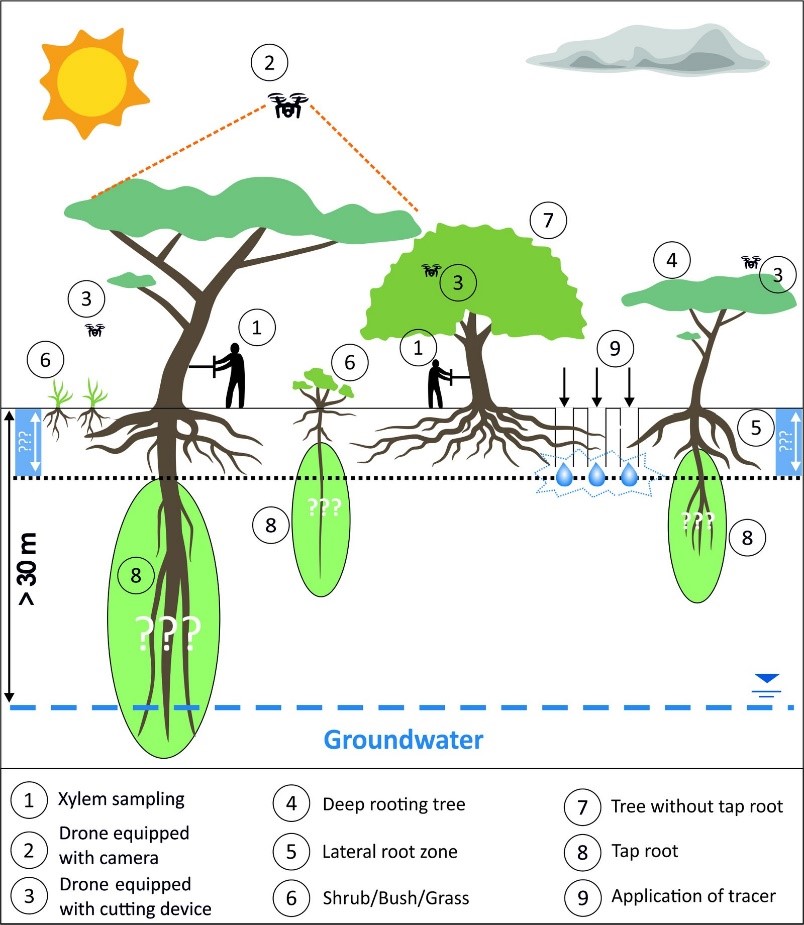 Illustration of the research concept. The idealized approach that one can take a sample from a tree stem, analyze the isotope composition and compare it to the source water (soil) becomes much more complex, when deep roots are involved. Tracer experiments can help to distinguish uptake depths better, but are difficult to apply. With an extensive monitoring, it might be possible to identify drone-derived indicators for deep rooting trees.

In the project Isodrones (www.isodrones.de), funded by the Volkswagen Foundation (https://www.volkswagenstiftung.de/en), researchers from TU Braunschweig, Germany, aim to develop a widely applicable method for identifying and quantifying water uptake through deep roots.

It is widely accepted that such roots are highly efficient in the acquisition of water once tapping the groundwater; however, they are rarely considered in the management of water resources, mainly because of the lack of quantitative methods (Maeght et al., 2013; Pierret et al., 2016).

To achieve that, the scientists approached the problem from two aspects:

The Isodrones project will ultimately try to answer the question: Can we identify deep water uptake solely drone-based methods?

In the beginning the required data need to be collected and a suitable method developed. Therefore, the goals for the first campaign were:

i) to establish a suitable instrumentation in the compartments soil, vegetation and atmosphere;

ii) develop and test a method for the in situ measurement of soil and plant water isotopes; and

the campaign so far…. 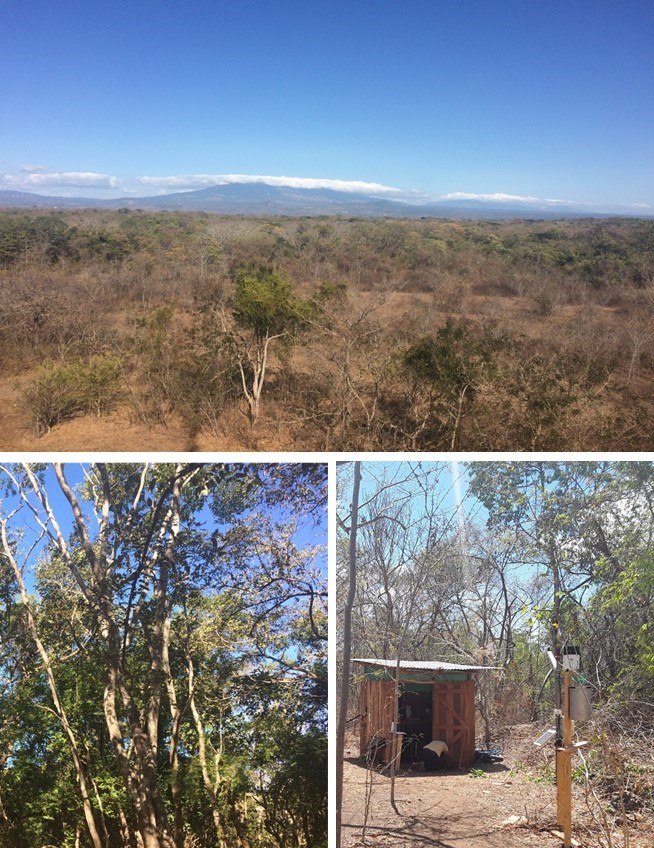 The Isodrones study site, from various angles, in Costa Rica.

This first, four-month campaign took us to the northwest of Costa Rica – a nearly ideal location for the project, because of the proximity of a large dry forest (P ~ 1700 mmy-1) and a rainforest environment on the other side of the volcano (P ~ 3000 mmy-1). Deep rooting strategies are very likely at both sites, but for completely different reasons. For the 2019 campaign, the focus was on the dry site, namely the ‘Estacion Experimental Forestal Horizontes’ (EEFH), located in Guanacaste, the driest region of Costa Rica with up to six months of zero rainfall.

We chose two plots of 250 m2 and 150 m2, each one with abundant individuals of each of the target species. Two evergreen tree species were selected (Caoba, a mahogony species and Tempisque, the ‘guard of the river’) and three individuals each equipped with Edaphic Sap Flow Sensors, leaf temperature sensors and ‘stem boreholes’ (for measuring water stable isotopes in situ) at the trunk, a lateral root and the deep rooting part of the tree (i.e. three sensors per tree).

In the soil, a ditch of two meters depth was established and soil moisture, soil water potential sensors as well as soil gas probes for water isotopes were installed at seven depths. In addition, we measured water potential of trees three times per week and collected destructive samples of soils and plants frequently for additional analysis.

Likewise, drone overflights were carried out multiple times per week. The real novelty of this research, however, was the combined system for measuring both soil and xylem water isotopes directly in the field. Using this high resolution dataset, we will be able to separate the total transpiration of the tree into a shallow and deep uptake component. In the images down below, the experiment is visualized and commented.

At the end of the experiment, three irrigations using isotopically labelled water were conducted on the 500 m² (total amount ~ 15 mm) in order to see if the trees switch their water source from deep to shallow layers.

The data is being processed currently and will be published within the next year.  A second campaign will take place in winter 2019/20. The overall project is funded for five years (2018-2023). 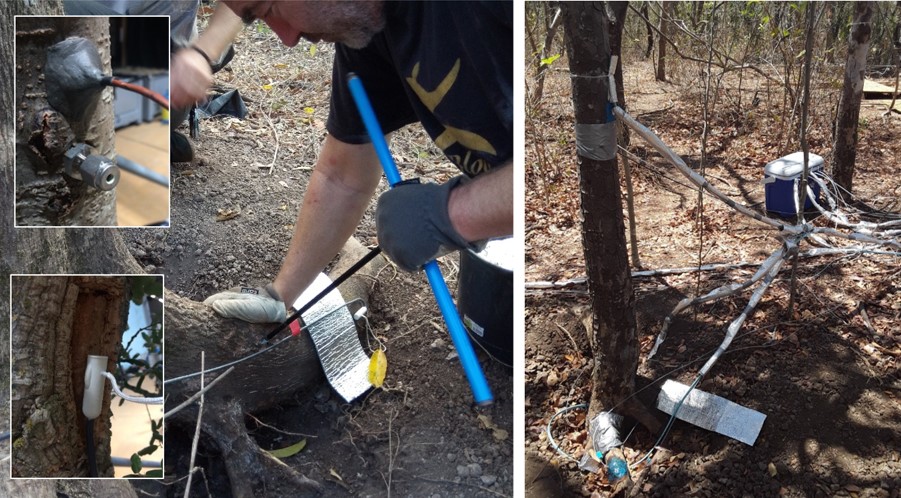 .: Installation of stem boreholes and sap sensors (left). Inset graphics: stem borehole and temperature sensors (upper); sap sensor (lower). On the right side, the complete setup for each tree is depicted. 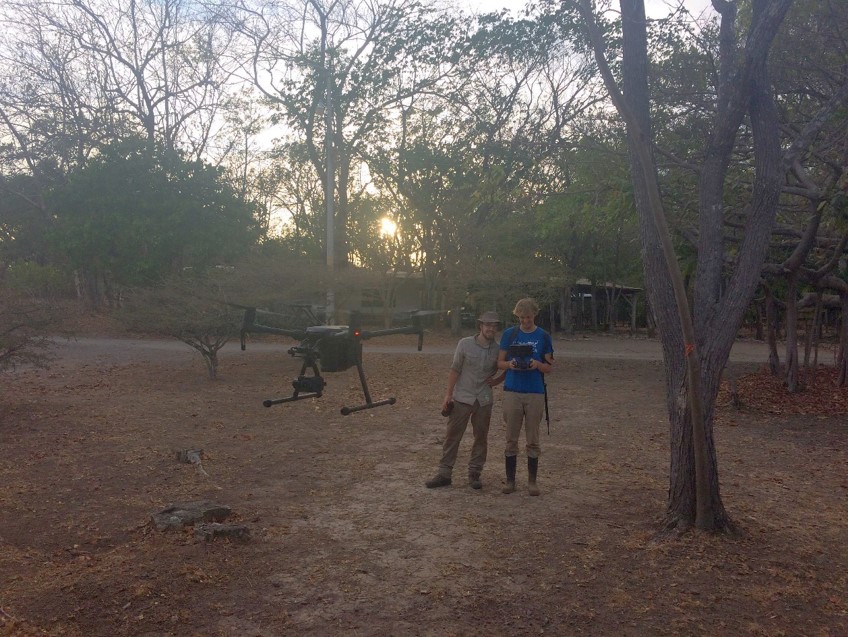 First (raw) drone-derived images. On the right side, the thermal infrared image of the left RGB image is depicted. It can clearly be seen how the two canopies differ in relative temperature – does one of the trees have access to deep water?

Frequent updates can be found on the Isodrones homepage: www.isodrones.de .