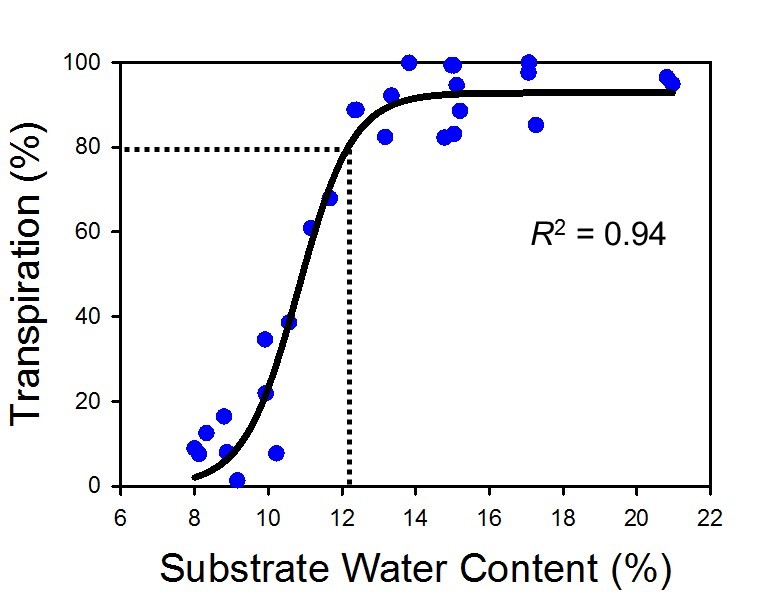 Measuring the hydration level of plants is a significant challenge for growers. Hydration is directly quantified via plant water potential or indirectly inferred via soil water potential. However, there is no universal point of dehydration with species and crop varieties showing varying tolerance to dryness. What is tolerable to one plant can be detrimental to another. Therefore, growers will benefit from any simple and rapid technique that can determine the dehydration point of their crop.

New research by scientists at Edaphic Scientific, an Australian based scientific instrumentation company, and the University of Queensland, Australia, has found a technique that can simply and rapidly determine when a plant requires irrigation. The technique builds on the strong correlation between stomatal conductance and plant water potential that is found across all plant species. However, new research applied this knowledge into a technique that is simple, rapid, and cost-effective, for growers to implement.

The classic textbook values of plant hydration are field capacity and permanent wilting point, defined as -33 kPa (1/3 Bar) and -1500 kPa (15 Bar) respectively. It is widely recognised that there are considerable limitations with these general values. For example, the dehydration point for many crops is significantly less than 15 Bar.

Furthermore, values are only available for a limited number of widely planted crops. New crop varieties are constantly developed, and these may have varying dehydration points. There are also many crops that have no, or limited, research into their optimal hydration level. Lastly, textbook values are generated following years of intensive scientific research. Growers do not have the time, or resources, to completely investigate optimal hydration for their crop. Therefore, a new technique that provides a rapid assessment is required.

Plant physiologist refer to P50 as a value that clearly defines a species’ tolerance to dehydration. One definition of P50 is the plant water potential value at which stomatal conductance is 50% of its maximum rate. P50 is also defined as the point at which hydraulic conductance is 50% of its maximum rate. Klein (2014) summarised the relationship between stomatal conductance and plant water potential for 70 plant species (Figure 1). Klein’s research found that there is not a single P50 for all species, rather there is a broad spectrum of P50 values (Figure 1). 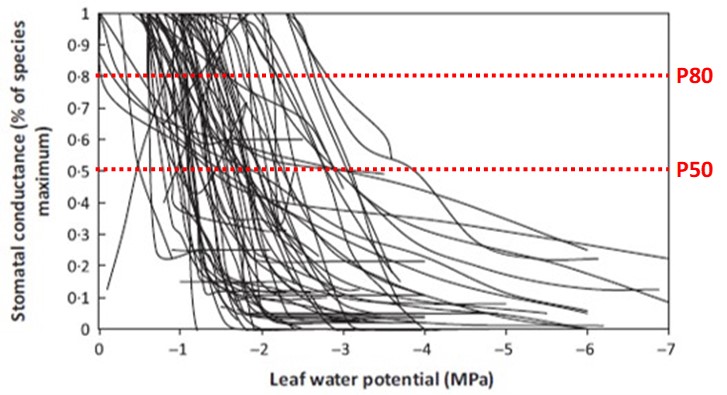 Figure 1. The relationship between transpiration (stomatal conductance) and leaf water potential for 70 plant species. The dashed red lines indicate the P80 and P50 values. The irrigation refill point can be determined where the dashed red lines intersect with the data on the graph. Image has been adapted from Klein (2014), Figure 1b.

Research by Edaphic Scientific and University of Queensland has established a technique that can rapidly determine the P80 value for plants. This is called an “Irrigation Curve” which is the relationship between stomatal conductance and hydration that indicates an optimal hydration point for a specific species or variety.

Once P80 is known, this becomes the set point at which plant hydration should not go beyond. For example, a P80 for leaf water potential may be -250 kPa. Therefore, when a plant approaches, or reaches, -250 kPa, then irrigation should commence. 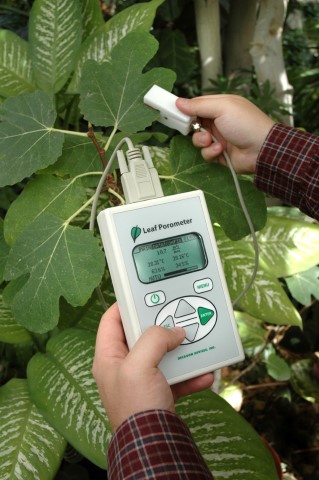 The SC-1 Leaf Porometer is a portable, handheld meter for measuring stomatal conductance.

Irrigation curves were created for a citrus (Citrus sinensis) and macadamia (Macadamia integrifolia). Approximately 1.5m tall saplings were grown in pots with a potting mixture substrate.

Stomatal conductance was measured daily, between 11am and 12pm, with a SC-1 Leaf Porometer. Soil water potential was measured by combining data from a MPS-6 Matric Potential Sensor and WP4 Dewpoint Potentiometer. Soil water content was measured with a TEROS-12 Water Content, Temperature and EC Sensor. Data from the TEROS-12 and MPS-6 sensors were recorded continuously at 15-minute intervals on a ZL6 Data Logger.

When stomatal conductance was measured, soil water content and potential were noted. At the start of the measurement period, plants were watered beyond field capacity. No further irrigation was applied, and the plants were left to reach wilting point over subsequent days.

Figure 3 shows the results for the soil water content Irrigation Curves where P80 was 13.2 % and 21.7 % for citrus and macadamia, respectively.

From these results, a grower should consider maintaining soil moisture (i.e. hydration) above these values as they can be considered the refill points for irrigation scheduling.

Preliminary research has shown that an Irrigation Curve can be successfully established for any plant species with soil water content and water potential sensors. Ongoing research is currently determining the variability of generating an Irrigation Curve with soil water potential or content. Other ongoing research includes determining the effect of using a P80 value on growth and yield versus other methods of establishing a refill point. At this stage, it is unclear whether there is a single P80 value for the entire growing season, or whether P80 shifts depending on growth or fruiting stage. Further research is also required to determine how P80 affects plants during extreme weather events such as heatwaves. Other ideas are also being investigated.

For more information on Irrigation Curves, or to become involved, please contact Dr Michael Forster: michael(Replace this parenthesis with the @ sign)edaphic.com.au