What would possess a team of scientists to drift on a primitive raft in the Pacific Ocean for over 60 days? As always, it is in the name of science – specifically anthropology and environmental science research.

Known as the Kon-Tiki2 Expedition, the scientists are examining if it was possible for Polynesian and South American seafarers to traverse the Pacific Ocean using the maritime technology of their times. Additionally, the scientists are collecting data for climate change, ocean acidification, plastic marine pollution, meteorological and ecological research. 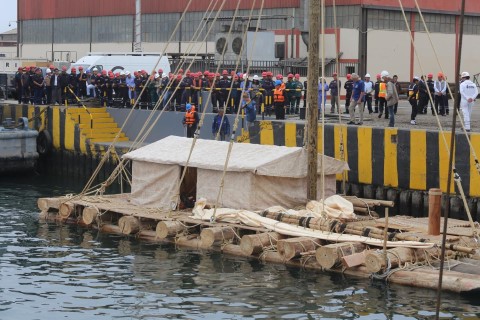 One of the two Kon-Tiki2 rafts being launched in Peru. Image source: www.kontiki2.com

The main motivating factor behind the project is to demonstrate that in pre-historic times humans had the maritime capability to traverse to and from the Pacific islands (Polynesia) and South American continent and back again. It is commonly believed that humans migrated east across the Pacific, island hopping, from Asia to Rapa Nui (Easter Island) and Hawai’i, and that there was no human migration or travel from the Americas to the Pacific. But recent DNA evidence has shown that Polynesians interacted with South Americans. Therefore, either Polynesians traversed to South America, and/or South Americans traversed to Polynesia. 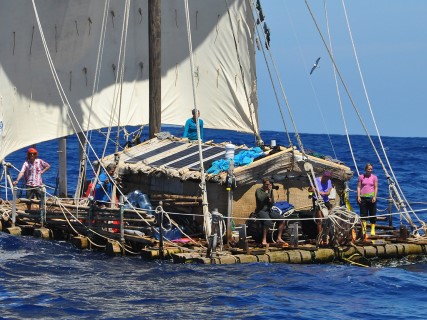 All in the name of science! A Kon-Tiki2 raft on the open ocean. Image source: www.kontiki2.com

For the Kon-Tiki2 Expedition, two replica rafts were built from balsa wood just as would have been done in Peru centuries ago. The Expedition then set sail from Peru, aiming for Easter Island, using nothing but ancient maritime technology and resources. After 42 days, the expedition successfully arrived in Easter Island.

Presently, the scientists are attempting to the return trip to Peru. At time of writing, they were 60 days into their expedition, approximately 1008 nautical miles to the south of south-east of Easter Island, and a long way from their home destination. But the Expedition is well on the way to demonstrating that it was possible to travel from Polynesia to South America and back again using ancient maritime technology.

Amazingly, the Kon Tiki2 raft is also equipped with highly advanced, scientific instrumentation. For example, they have a CTD for ocean conductivity, depth and temperature measurements, a weather station for meteorological measurements, and a dissolved CO2 sensor from Franatech for measurements of pCO2 in the ocean. 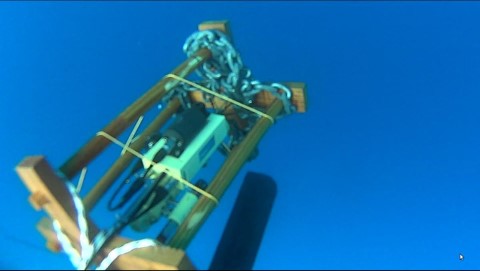 A CTD instrument that was cast from the Kon-Tiki2 raft to measure conductivity, temperature and depth in the ocean. Image source: www.kontiki2.com